Breaking News on our Mystery Botanist

Earlier this year we posted a photograph of a portrait we found in a box of paperwork at the back of the herbarium. It clearly shows a Victorian botanist – but which one? We speculated that it might look like Richard Buxton, who was a very interesting and impressive self-taught naturalist, but we now have another contender. 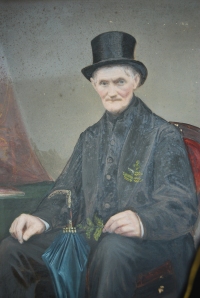 Christine Walsh (one of our dedicated team of herbarium volunteers) came across a picture of Joseph Evans (1803 – 1874), botanist and herbal doctor from Boothstown. There’s a biography of him on this site, and I have to say, he looks very like our mystery man. What do you think?

Is that Richard Buxton’s nose?

Rummaging through a box at the back of the herbarium earlier today we came across this lovely painting of a botanist (nothing like having a fern in the lapel to demonstrate your occupation!).

Looking at a display panel in the herbarium, we thought the man in the portrait looks rather similar to the daguerreotype of Richard Buxton aged 65 (on the right). What do you think?

Richard Buxton (1786 – 1865) was a very interesting man, born in Prestwich and apprenticed to be a children’s shoemaker, he decided to teach himself to read. From there, he moved on to educating himself about the plants he found growing around him, firstly by reading Culpeper’s Herbal, before reading more scientific texts which explained the Linnaean system for classifying plants. He became a renowned local botanist and wrote floras of the plants found around Manchester. We are proud to have plant material collected by such a remarkable man in our herbarium collections, and so we have some out on display in our Manchester Gallery.

What a life Whitelegge had!!  His childhood was incredibly hard.  He worked in a tarpaulin factory, become a ‘piecer’ in a cotton mill, worked as a weaver and then a nut tapper and bolt threader in a machine shop – all by the age of 11!

At the age of eleven he entered Christy’s Hat Manufactory at Stockport, after undergoing medical examination and being certified as a youth of fourteen years. After gaining an insight into this trade, the youth signed indentures and became bound as an apprentice to another hat manufacturer for a term of seven years. The wages were six shillings a week for the first two years of this employment, and then an increase of two shillings per week until half of the apprenticeship term was served. After that Whitelegge was to be put on journeyman’s rates but was to receive only one third of these earnings. Just prior to this last employment he was receiving only four shillings per week, on which he and his mother subsisted during the awful days of the Lancashire cotton panic, brought about by the American Civil War. During the whole of one year the little family had no meat of their own buying, and in order to replenish the larder young Whitelegge used to rise at daylight on Sundays to scour the countryside for blackberries and mushrooms and occasionally seized potatoes and turnips from the properties of unsuspecting farmers. At this time his earnings provided the rental of a house. at one shilling and sixpence per week, leaving a balance of two shillings and sixpence for food and clothing. It was pitiful to here Whitelegge relate these facts, and to realize that the family would have been better off if he had been out of employment, as the relief money given at the time of the cotton panic amounted to two shillings and twopence per head. Having all this suffering still vivid in his memory, Whitelegge soon became acutely aware that the terms of his apprenticeship were iniquitous and after some contemplation he deserted his master. Setting out on foot towards Ashton-under-Lyne in Lancashire, he reached the Village of Hurstbrook near this town, and succeeded in getting work as a Journeyman with a kindly hat manufacturer to whom he confessed his trials. With his new employer’s help, Whitelegge evaded police inquiry, and sheltered at a farmhouse some distance away, where all available work was taken him. Except that he was all but arrested on several occasions when surreptitiously visiting his mother at Stockport, his stay of two years on the farm, was spoken of by Whitelegge as one of the most enjoyable periods of his life.

Whitelegge certainly lived an eventful and interesting life.  The stories I have discovered about Whitelegge’s life and work will really bring his specimens to life when they go out to our local communities in our ‘Museum Comes To You’ boxes.

My Dear Whitehead… …I remain yours very respectfully Thomas Whitelegge

Having looked through our archives, I found one letter from Thomas Whitelegge.  It was written to his old friend from The Ashton Linnean Botanical Society, John Whitehead.  It is dated March 23, 1885 and shows Whitelegge’s address as 537 Crown St, Surry Hills, Sydney, New South Wales.

Having discovered last week that Whitelegge had corresponded with Darwin, I was a little disappointed to only find this one letter, however it is such an interesting letter I soon cheered up.  Considering Whitelegge left school at 8 years old, his handwriting is remarkably easy to read.  Working in the herbarium and doing my History degrees, I have spent many hours transcribing Victorian handwriting so I know how difficult it can be to read.  I’ll try and find time to transcribe the letter fully and post it up here, but in the meantime here’s an excerpt to whet your appetite…

“…I  think it is now time I gave you some hint as to how I like this country.  I like it better every day and never regret coming out here but I have been very fortunate in getting a government billet, which is a fine thing out here there are no broken weeks or paydays although there is some 10 public holidays in each year, and the hours are only school hours 9 to 4 with 1 hour for dinner so that when I leave off I can jump on our steam tramway cars and go mossing and have 3 or 4 hours out before dark.  The trams go at such a speed to that is a wonder there is not more accidents then what there is.  The cars are double deckers ugly looking things appearing top heavy so that you would think they would topple over…”

We had an exciting morning in Herbarium last Tuesday.  It began when Andrea Winn, the Curator of Community Exhibitions, called to see if we could supply some specimens to put in a ‘Museum Comes To You’ box linked to the Manchester Gallery.  Andrea had already collected some cotton samples but now wanted either some Bog Rosemary (Andromeda polifolia) or a specimen collected by one of our working class, Victorian botanists.  I decided to see if I could combine the two requests and find some Bog Rosemary collected by a working class botanist.  In our British collection I found a lovely sheet of specimens collected from Lindow Common in Wilmslow by Thomas Whitelegge in 1877.

I didn’t know much about  Whitelegge but a quick look in ‘Desmond’ (Dictionary of British and Irish Botanists and Horticulturalists: Including Plant Collectors, Flower Painters and Garden Designers, Ray Desmond, 1977) revealed that Whitelegge (1850-1927) was indeed a workingman naturalist.  The short entry showed that he was born in Stockport, was Secretary and President of the Ashton Linnean Botanical Society and that he moved to Australia in 1883 where he joined the staff of the Australian Museum in Sydney until 1908.  Whitelegge became an authority on ferns and mosses and to top it all, he corresponded with Charles Darwin.

Andrea and I immediately started looking through our archives for any correspondence to or from Whitelegge.  Meanwhile Leander had found a more detailed biography of  Whitelegge in the Australian Dictionary of Biography Online.  We discovered that he had been born into poverty to an illiterate brickmaker, leaving school at just  8 years of age.  He went to work in a factory before becoming apprenticed to a hatter.  We were then shocked to find that he broke his indentures and lived as a fugitive for 2 years on a farm in Hurstbrook, Lancashire.  It was whilst working on this farm that Whitelegge developed his interest in natural history.

Andrea and I are both following some leads to see what else we can discover about Whitelegge.  We will keep you posted of any news.