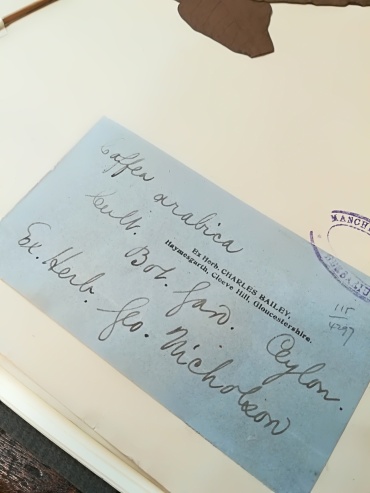 It’s rather strange to think about it, but I suppose I have been living through something of a revolution in hot drinks in the UK. Traditionally, we are considered to be a nation of tea drinkers, but now on my way to work, I suspect that the majority of travel mugs clutched by my fellow commuters contain a more stimulating coffee instead. In 2008, the UK started to import more tonnes of coffee (green and roasted) than tea. Of course, you get more cups out of a kilo of tea than you do out of a kilo of coffee, but the upward trend for coffee importation continues (FAOSTAT).

It used to be that the nearest my coffee drinking came to any kind of ceremony was if I happened to be the lucky person who got to pop the seal on a new jar of instant. Now, however, even if there isn’t a gadget in the kitchen, then there’s ususally a coffee shop nearby to provide you with your morning ritual and your perfect brew. In 17th and 18th century London and Oxford, coffeehouses were also the place for men to go and read the news, make financial deals, reason about academic subjects and perhaps even discuss something a little seditious. By the end of the 18th century, these coffeehouses had all but disappeared. Many factors have been suggested for their decline, including that printed news was easier to come by, and the development of gentleman’s clubs. Tea drinking was on on the rise as it became fashionable at court, as women could participate in a way that they couldn’t in coffeehouses, and of course, through the promotional of the British East India Company’s trading interests in tea from China and particularly from India. Names such as Assam, Darjeeling, Ceylon (Sri Lanka), Kangra and Niligri became familiar in the UK through the tea gardens established there by the British in the 19th century.

Easier to prepare, tea remained the hot drink of choice in the UK for about two centuries providing warmth, comfort and calories (with milk and sugar) with every cup. Many countries favour either tea or coffee at the expense of the other, and in the UK a 2012 YouGov poll still showed more people still rate a cuppa as their favourite hot drink (52% tea/ 35% coffee). The coffee shop sector is one of the strongest businesses in the UK economy, turning over £9.6 billion in 2017. So when you next get to the counter of a coffee shop, what will it be – coffee or tea?

This week I was called over to the offices of the finance team to take a look at their dwarf umbrella plant (Schefflera arboricola). It’s clearly received plenty of TLC and is thriving. However, in striving to reach the light it became too tall and very top-heavy. A bit worrying if you’re the one sitting below it! So it was time for some pruning and I’ll be taking the bits home to see if I can get some cuttings growing.

The finance team aren’t the only fans of this plant in the Manchester Museum. This beautiful little frog is a Lemur Leaf Frog; a critically endangered species which is part of the breeding programme in the newly refurbished vivarium.

The dwarf umbrella plant (S. arboricola) is a member of the Araliaceae (ivy) family and is a popular houseplant (especially in variagated forms). This specimen from our cultivated plant collection was collected in China by the plant hunter Augustine Henry (1857–1930). It is undated and was originally identified as a related plant, Heptapleurum octophyllum, but the identification has since been re-determined, as shown by the extra labels. The herbarium sheet is in our cultivated plant collection as the dwarf umbrella plant is native to Taiwan and Hainan, not the mainland Chinese province of Yunnan where this was collected.

This entry was posted in Biodiversity, Botanists, Specimen of the Day and tagged China, cultivated, houseplant, Leo Grindon, Schefflera, Vivarium.

Snowdrops: pearls of the opening year

Putting away some specimens in the herbarium last week I noticed a folder labelled Nat. Ord. CLXXIV Amaryllaceae GENUS 8. Galanthus.

Unfortunately pressed flowers rarely keep their natural colours, and snowdrops are no exception – even though their petals are white.  The flowers turn brown and the leaves darken too.

Our cultivated collection also includes illustrations.  Below is a colour illustraion of ‘Eight kinds of Snowdrops’ from The Garden, dated 23 January 1885:

A short article in The Garden (no date, probably around 1886) by F. W. Burbidge begins, ‘THE GIANT SNOWDROPS. One of the minor miseries of my life is having to live in a garden containing thirty distinct kinds of Snowdrops, and not being able to boast of possessing Galanthus fosteri, the “giantest”, and so far, the most to be desired of them all.  Still, I live in hopes, since we are told that, “all things come to those who know how to wait”.’

Burbidge goes on to describe the species and varieties of snowdrop giants in his garden.  He concludes, ‘I hope all the readers of these notes who have distinct Snowdrops in their collections … will be so good as to tell us of them, since there are now a good many of us deeply and seriously interested in these pearls of the opening year’.

Another delightful little piece about the average flowering dates of snowdrops (probably dated around 1880 to 1890):