A big thank you to everyone who braved the unseasonbly cold weather and came along to our bioblitz in Whitworth park. To see just how cold it was, check out the photos on Andrew’s (our curatorial trainee) blog – the many-layered look was very in!

With the dedicated help of 5 wildlife recorders and many enthusiastic visitors we spotted a grand total of 86 different species living in the park. My favourite, which was spotted by a number of park visitors, was definately the Lady’s Smock or Cuckoo flower (Cardamine pratensis). It was covering large swathes of the grass with it’s pretty pink flowers and is a sure sign of spring, even if the weather didn’t didn’t agree!

The Museum Allotment in April

It’s about time I took another picture of the allotment from up here in the herbarium, but a passing raincloud has just made it so dark and wet that you can see the lights reflecting on the pavement at the Museum entrance. The plants are loving the April sun and showers though, and I think there’s going to be plenty of things for the allotment volunteers to be tending. The rhubarb is getting bigger, the little broad bean plantlets are growing strongly and all the different varieties of mint are beginning to explore new areas of the raised beds. 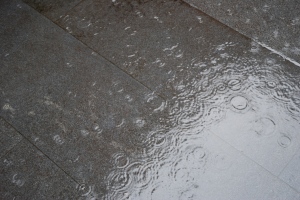 The green roof also had some work done to it over the winter and is beginning to look green again. The shed is now sporting a nice selection of ferns in amongst other low growing plants.

This entry was posted in Manchester, Museum Allotment.

Join The Manchester Museum Youth Board and the Friends of Whitworth park for a festival of fun in Whitworth Park at our Wonderful Whitworth Wildlife big Saturday to help us create a wildlife area, specifically for the symbol of our city, the Bee, but that our entire community can enjoy! Whether you’re interested in plants, animals, natural history or just want to discover something new there’s an activity for everyone. On the day you could be helping create a green, animal friendly environment that will last for years! So come along to experience local wildlife, environmentally friendly craft activities, archaeology, wildflower planting and recording the species of animals and plants found in the park.

Not a waterproof coat in sight!

Now there couldn’t be a finer way to listen to a lecture! These first-year undergraduate students from the University of Manchester are in Mallorca to learn about Mediterranean ecosystems and plant adaptations to the climate. On days like today it’s much easier to explain the challenges of the Mediterranean climate than on days when the rain is falling steadily. They also get to appreciate the view too; this view is out across the Bay of Pollensa where underneath the water there are large beds of seagrass called Posidonia oceanica or Neptune’s grass.

Although underneath the waves, it not a seaweed and is actually a flowering plant. It can produce fruits which float on the ocean, but it also spreads very slowly by creeping rhizomes. A recent study published in the journal Plos One has shown that these clonal meadows of seagrass could be thousands of years old.

Growing at depths of about 1-45m (depending on water clarity) these seagrass beds are very important ecosystems. These meadows trap carbon dioxide and release oxygen in coastal waters through photosynthesis, provide energy at the bottom of the food chain and act as nursery grounds for many fish and invertebrates. The environmental importance of this ecosystem is reflected by its protection as a priority habitat by the legislation of the EU Habitat Directive and by the programs aimed at conserving it.

These meadows also have important effects on the seashore. Debris is washed-up from below the sea and collects on the beaches, sometimes forming great sculpted ‘cliffs’ of  plant material. These heaps of dead seagrass leaves and rhizomes are striking, but far more curious are the fibre balls which can also be found on some beaches. Wave action on the beach smashes up and wears away the tissue of the seagrass leaves, leaving only the leaf veins which get tangled up and moulded into these pebble shapes.

Which ever form the material ends up on the beach in, once there it helps to stabilize the shifting sands to build dunes, to retain water and to provide nutrients which allows plants to colonize the strandline.  Plants such as this lovely yellow-horned poppy (Glaucium flavum) which sadly isn’t in flower yet.

Best go back to staring a that sunny view………..