Last Friday saw the opening of the new temporary exhibition celebrating the life of Alan Turing, and particularly his work at the University of Manchester. As a child, Turing was interested in the natural world including how complex natural patterns can develop (such as Fibonacci sequences in sunflower and pinecone spirals) and he revisited this interest while working with the newly invented computer in Manchester. In 1952, Turing published this work in a paper (The Chemical Basis of Morphogenesis) decribing a model showing how these patterns could develop from the interations of two chemicals. The new exhibition combines material used by Turing during his research time in Manchester with objects from the Museum’s extensive natural science collection.

The allotment in March

Having had a few days of really warm weather, everything on the allotment is looking very green and happy and the kale is looking particularly good. We’re also beginning to see the first of this year’s weeds popping up – a sprinkling of celandine seedlings. Perhaps I should re-plant them in the wildflower plot!

Last Friday the volunteers noticed that the hazel bush is flowering which is pretty exciting as last year there were only leaves. It’s got 5 female flowers open, will we get any nuts?

This entry was posted in Museum Allotment.

The biggest seed in the world

Sailors across the Indian Ocean used to believe that the seeds from the coc-de-mer came from mythical underwater coconut trees.The double coconut seeds were always hightly prized, and so once the tees were discovered on islands in the Seychelles, they became threatened with over-collection. The remaining two populations of these palm trees in the Seychelles are now protected in National Parks.

Here’s a clip of me talking about it with the Curator of Earth Sciences, David Gelsthorpe, about our coco-de-mer.

Every now and again something unusual comes into the herbarium.  Today it was a pair of giant’s boots, and huge models of vegetables.

They were donated by another part of the university and we thought we could put them to good use at a Big Saturday, here at the Museum. 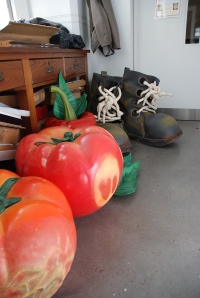 This is Abraham Flatters and his image is on a lantern slide which was used in a magic lantern as an early form of image projection. Abraham Flatters was an expert at making these and he went into business with Charles Garnett to form the successful company Flatters and Garnett.

They supplied both lantern slides and microscope slides on many aspects of Natural History to universities. Those which were bought by the science departments of the University of Manchester (then Owens College) are now in the Manchester Museum collections. We also have many of these very nice display boxes which demonstrate showing various features of british trees.

There is a very good history of this Manchester firm produced by the Museum of Science and Industry which can be read here. If you’re interested in the history of Manchester then there are more activities taking place in the city for the Manchester Histories Festival which comes to a close this weekend. Don’t miss the big Celebration Day at the Town Hall where we will be giving a selection of museum objects some time in the spotlight.