Is that Richard Buxton’s nose?

Rummaging through a box at the back of the herbarium earlier today we came across this lovely painting of a botanist (nothing like having a fern in the lapel to demonstrate your occupation!).

Looking at a display panel in the herbarium, we thought the man in the portrait looks rather similar to the daguerreotype of Richard Buxton aged 65 (on the right). What do you think?

Richard Buxton (1786 – 1865) was a very interesting man, born in Prestwich and apprenticed to be a children’s shoemaker, he decided to teach himself to read. From there, he moved on to educating himself about the plants he found growing around him, firstly by reading Culpeper’s Herbal, before reading more scientific texts which explained the Linnaean system for classifying plants. He became a renowned local botanist and wrote floras of the plants found around Manchester. We are proud to have plant material collected by such a remarkable man in our herbarium collections, and so we have some out on display in our Manchester Gallery.

And an ‘Amaizing’ plant resource….

Over the past several decades anthropologists active in the field of ancient Peruvian civilisation have scrutinised the role played by the grain maize. This may seem like a rather odd thing to be scrutinising but how a civilisation feeds itself has a remarkable impact on how it develops. Ancient civilisations that became dependant on farming, such as Egypt and China, established permanent settlements.  The consequence of this was the development of traits that we attribute to a civilisation, such as monumental architecture and organised religion. Recently a consortium of north and south American higher education institutions, including the Field Museum, Chicago, USA,  published a paper confirming that the rise of ancient Peruvian civilisation was linked to the extensive farming of maize during the Late Archaic period (3000–1800 BCE). You can read the full paper at http://www.pnas.org/content/early/2013/02/19/1219425110

Manchester Museum has a wealth of ancient Peruvian artefacts including textiles, ceramics and tools, some of which are on display in the…

As it is Fairtrade Fortnight Anna Bunney and myself decided to host a fairtrade tea party on Monday in the Museum’s staffroom.

There was a good turn out for tea and cake on a cold February afternoon and fun was had by all. All tea and coffee available was of course fairtrade as were the delcious cakes.

Thanks to everyone who came along and donated and particularly to lovely people who baked or brought cakes. We had a boozey tiffin from Campbell Price, a chocolate orange cake from Ruth Aplin (with alittle input from Luke Lovelock), Persian Sally cake from Babak Bassirian, cardamon bread from Shiree Roberts, coffee and walnut cakes from Rachel Webster, rock cakes from Debbie Doran, biscuits from Jenny Discomb, banana muffins from Anna Bunney and burnt fridge cake from me. Ged Bridges did try and slip in some Mr Kiplings but luckily was caught in time! What a lot of wood!

Yesterday, Andrew Lawton (the Museum’s curatorial trainee) and I braved the cold outside the Museum entranace to make bird boxes with Evan Powell from the RSPB.

For National Nest Box Week, we made homes for starlings and sparrows which will be placed in trees around the University of Manchester campus. We’re hoping to increase the amount of wildlife that calls the University campus home.
Members of the public helped us by decorating the boxes with their individual artworks

We couldn’t decide whether this was a colder event than the Wonderful Whitworth Wildlife bioblitz last year!

Tomorrow, artist Lucy Burscough will be making beautiful bird houses made from woven naural fibres in one of our Urban Naturalist events. These nesting pouches would be suitable for wrens and are inspired by the work of the Scottish ‘outsider artist’ Angus McPhee.

A New Year in the Agricultural Calendar

Chinese New Year, also known as New Year in the Agricultural Calendar, is just round the corner. As billions of people get ready to welcome in the New Year we have had a look into the role botany plays in the festivities and at some of our more important Chinese donations.
Oats are important in the celebration of the New Year. On the eighth day of the lunar month before the new year a traditional porridge is made and served to each member of the family called làbāzhōu (臘八粥), pardon my Mandarin…

Bamboo sticks, along with fireworks and firecrackers, are burnt to make as much noise as possible on the first day if the New Year. This is practiced to chase off evil spirits.

At midnight on the eighth day of the New Year the Hoklo people (Han Chinese people whose traditional ancestral homes are in southern Fujian) will offer thanks giving prayers to the Emperor of Heaven, commonly offering sugarcane. Legend states that the Hoklo people were spared from massacre by Japanese pirates by hiding in a sugarcane plantation during the eighth and ninth days of the Chinese New Year, coinciding with the Jade Emperor’s birthday. As a symbol of their gratitude the Hoklo people will offer sugarcane on the eve of his birthday.

Also in the preceding days to the New Year debts of gratitude are often sent, commonly gifts and rice are sent to business associates and extended family members.

Here in the herbarium we have a rather large collection of plants found in South-East Asia, mainly China, collected by Wai-Yu Lee, a Chinese botanist. He donated over 1000 plants from his personal herbarium in 2002.

We also have several specimens collected in China by the botanist Augustine Henry (1857 — 1930). Although he regarded his work as a hobby, he became one of the most important botanical collectors to have worked in central China.

Why not celebrate the Year of the Snake by making porridge, bashing bamboo sticks or offer sugarcane to past Emperors? If these celebrations don’t take your fancy, you could just watch some fireworks, details of the 2013 display in Manchester can be found here.

This entry was posted in Manchester, News and tagged Augustine Henry, Chinese New Year, Wai-Yu Lee, Year of the Snake.

Today I had a really good chat with the artist Lucy Burscough about possibilities for future arts and health projects and I thought I’d share this wonderful painting of a Papaver somniferum seed head from her blog. I love the beautiful glaucous green of the ripening seed head. You can also see the work under construction in another of her posts here. 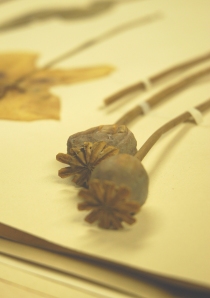 It’s been a real pleasure to paint one of my favourite things that grow in the garden, a Papaver somniferum seed head. Spending the time to really look at it’s structure and mix it’s colours, both muted and vivid, has made me appreciate it’s beauty even more. I hope you enjoy the results too. This entry was posted in Manchester, News and tagged art, painting, poppy.