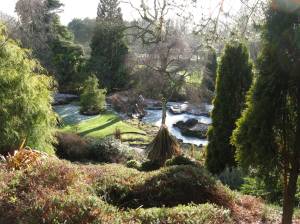 I pledged to enjoy the seasons changing by going for a walk every month.  It’s part of  2010:International Year of Biodiversity.

Fletcher Moss Botanical Gardens, Didsbury was my choice for January.  Wellies, blue sky, sunshine, gloves, scarf and snowdrops.  Its a gem of a place, part wildlife haven, part gardens.  There were quite a few people out enjoying the crisp winter sunshine.

The cafe is run by volunteers and it is here that the Royal Society for the Protection of Birds was founded.  It was formerly called the Plumage League by a group of ladies in 1889 who campaigned against the slaughter of birds.  Their feathers were used to decorate women’s hats in nearby Stockport, the hat making centre of the world in those days.  The Plumage League eventually joined forces with the ‘Fur and Feather League’ in Croyden, to become the RSPB. 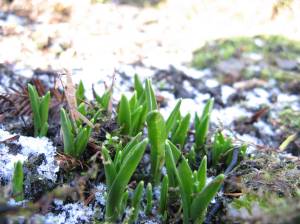 Snowdrops are just coming out.  I’d like to go back in a week or 2 to see them in their glory.  My daughter and I had a close look at one and she thought it looked like an upside down rose.

We delighted in stepping in the puddles in the grass, breaking the ice as we stomped.  Glad we wore wellies!  Back home to warm up with a hot cup of tea and popcorn.