Specimen of the day – Amyl salicylate

Amyl salicylate is the registered trade name of the chemical pentyl ortho hydroxy benzoate, also known as pentyl salicylate, and has the formula C6H4(OH)COOC5H11. This colourless liquid is frequently used in perfumes for its ability to counteract and/or mask unpleasant smells. Amyl salicylate has often been referred to as having an odour similar to orchids. It has also been included in perfumes to help fix floral fragrances to the skin. In addition to perfumes, the chemical is often included in shampoo, soaps, deodorant, hair sprays and fabric softeners. Amyl salicylate is produced from salicylic acid by an esterification reaction (mentioned in later section). 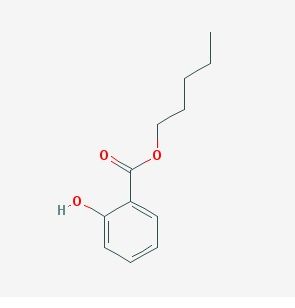 The chemical structure of the ester amyl salicylate.
Image taken from http://pubchem.ncbi.nlm.nih.gov/compound/Amyl_salicylate#section=Top

The term ‘amyl salicylate’ is not solely used for pentyl salicylate as it is sometimes used to refer to its chemical isomer. An isomer is a substance with the same molecular formula that differs in the way that its atoms are arranged. In this case, the molecular formula is still C12H16 O3 but the structural formula is C6H4(OH)COOCH2CH­­2CH(CH3­)2 (see image below). In fact, the amyl salicylate used commercially is often the isomer form of the compound. The isomer form of amyl salicylate is a clear liquid that is insoluble in water and has an orchid-like scent. The commercial use of the isomer is similar to that of the above substance, as both are used for the same purpose. Though not used particularly for medicinal applications, studies into the two isomers have also suggested that they can reduce pain, fever and inflammation.

Salicylic acid has a chemical formula of C6H4(OH)COOH and is the precursor of both isomers of amyl salicylate. For a long time, this acid was obtained from the bark of the willow tree in the genus Salix. Medicinally useful in its own right, salicylic acid has been used for pain relief, reducing fevers and as an anti-inflammatory. Due to its fungicidal properties, the acid is sometimes included in treatments for fungal skin infections, such as tinea (commonly called ringworm). Salicylic acid is also effective at breaking down keratin. Keratin is one of the key structural materials found in the body, including in the outer layer of human skin, hair and nails. By breaking down keratin, the acid can be used to treat a number of disorders, such as hyperkeratosis (abnormal levels of keratin), dandruff and ichthyosis (dry, thickened, scaly or flaky skin). Salicylic acid and many of its derivatives are used in pharmaceuticals to fight viral infections (like the flu), in dyes, as a flavouring and as a preservative. Unlike its amyl salicylate derivatives, the acid is not a liquid. It is a white, crystalline powder that possesses a sweet taste.

As mentioned above, salicylic acid is a precursor for the production of many chemical compounds including amyl salicylate. Two other derivatives of note are aspirin (also known as acetylsalicylic acid) and methyl salicylate, which is used to sooth joint and muscle pain. Aspirin, methyl salicylate and amyl salicylate are all produced through esterification of the precursor acid. Esterification reactions are those in which an –OH (hydroxyl) group is replaced by an –O–R group, where R is any alkyl group. An alkyl is a hydrocarbon consisting only of carbon and hydrogen atoms. The basic equation for this reaction is shown below. In the case of amyl salicylate synthesis, the R group is C5H11.

Hello! My name is Josh and I am new to the herbarium. I am a member of the faculty of life sciences at the University of Manchester, and for the work placement part of my degree it is my pleasure to spend a year working in the herbarium with Rachel and Lindsey . This is only my first week but we’ve already been busy collecting lots of tree samples from the array of trees we have on campus. Henry McGhie, Dr Webster and I started out by recording the geographic location of each tree we sampled, measured the girth of each tree’s main trunk and took small clippings of the leaves (and fruits in some cases!) Samples included the tulip tree, genus Liriodendron. The British crab apple tree, family Rosaceae and the Willow tree Salix.

Henry valiantly trying to experience the fruitful delights of the Crab Apple. 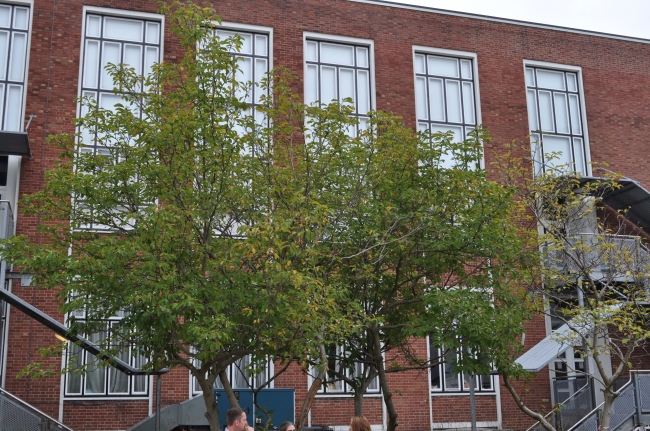