a Statue of Richard Spruce, botanist and explorer

I was surprised and delighted to find that Richard Spruce has a statue in Banos, Ecuador.  I found out through twitter.  Spruce was the first European to explore and collect plants in the Amazon basin and Andes and the herbarium at the Manchester Museum has thousands of his liverwort specimens.  Many of them are types.  I tweeted this last week:

“This morning: adding liverwort images to the museum’s database. These were collected in the Amazon by Richard Spruce”

and was delighted to receive a reply from Annaliese (@GoLiveJourney) who said:  “Wow! Richard Spruce was an ancestor of mine; I recently went to the Amazon in search of statue of him. Hooked on botany now!”

We contacted her and she sent us these pictures: 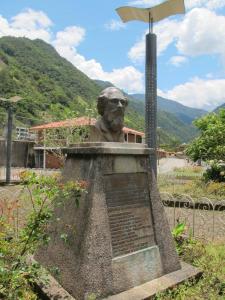 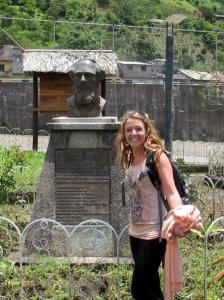 The statue is in Rio Verde, Banos, Ecuador.  I found another article on it – it was installed in 2006.  In this article, there is mention of the unveiling ceremony of the bust. The participants spent the afternoon on leisure walks to some of the localities visited by Spruce, and “a highlight was finding the rare liverwort Myriocolea irrorata Spruce, known only from the River Topo and long considered extinct. Spruce was particularly attracted to this species, which he considered “perhaps the most interesting bryophyte that I have every found … and the only agreeable souvenir I have preserved of this river” (Spruce 1908, Notes of a botanist on the Amazon and the Andes, vol. 2, p. 167).”

We are very proud to have four specimens of Myriocolea irrorata collected by Spruce from Ecuador.  (Photos to follow after the building work in the herbarium is over)

Anneliese has a lovely blog, and we all think twitter is a great way of sharing knowledge!

This entry was posted in Botanists, Collecting, Herbarium History.